David was born on the island of Oahu. At the age of 5 the family moved back to the island of Molokai, where David’s mother was originally from. There he resided until his mid 30’s.

He was raised as a typical local boy, spending most of his time in the ocean surfing or fishing, and not putting much attention on his future or his education. His parents tried to encourage the importance of school, but school just was not his thing. Life on Molokai was simple and carefree, or so he thought.

As a teenager David found himself falling more and more into a sinful life, not knowing where it was leading him. As he grew older the anger, drinking, and many other things were now controlling his life and it finally lead to a desire to end his life, which then led him to Jesus. In that moment in time of his deepest despair, he gave his life to the only One who could save him, the Savior of the world, Jesus the Christ!

After being born again his desire was to serve God in any way he could, from digging ditches to cleaning toilets at church, all he wanted to do was serve Jesus. But little did he know the Lord had a calling on his life to serve Him as a pastor/teacher. Through God’s calling on his life, David served in many different positions in ministry, from an elder to an Executive Pastor, as well as traveling to Israel to serve at Calvary Chapel Jerusalem.

Another area David served the Lord was taking part in missions trips. He has been on mission trips to Japan and Puerto Rico. While in Puerto Rico he found himself standing in one of the biggest Universities teaching professors and students the Word of God.

Once again, by God’s grace and calling on his life, he and his wife Anne moved to the Big Island to serve Him and now find themselves here in Waimea as Pastor of Imiola Church. For David, he considers living in Waimea like his second childhood since the lifestyle in Waimea is very similar to that of his home island of Molokai. David and his wife Anne have fallen in love with Waimea, Imiola church and the people here and are excited to see what God has in store for them as they serve Him and His people!! 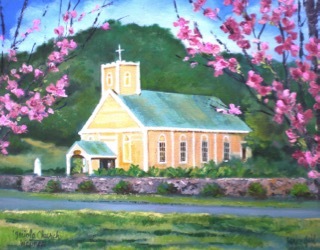